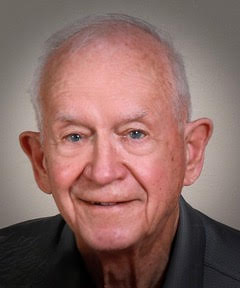 Mickey and Minnie strolled the paths of Timber Valley Park for many years. (That is, Mickey Thompson and his dog, Minnie.)  Former member, Mickey and his wife Annie moved into Timber Valley Feb. 9, 2007. They both were valued and beloved friends and neighbors.

They helped with many organized events but were also known for their Thursday afternoon “block party” where they hosted large crowds of socializing SKPers. Mickey and Annie both helped with landscaping and Mickey was Secretary for Jacks and Jills.  Mickey also volunteered for Dial- A-Ride and was a very popular driver.

Mickey was born January 28, 1931 and was raised in Sutherlin and Cottage Grove, Oregon.  He served as a Navy corpsman during the Korean War. Mickey and Annie (Marine veteran) are memorialized with their pictures on Central Avenue in Sutherlin where posters honor local service people.

Mickey and Annie were married for 67 years.  Mickey owned Sutherlin Auto Supply and recalled dealing with the Chapter 9 members who were building the SKP Park. After retirement he and Annie traveled full time for 18 years working in many state and national parks before moving into Timber Valley Park.

Mickey is survived by 3 children: Kathy Spjut, Mickey Jr., and Laura Ledford, and his brother Steve Thompson.  He also has 6 grandchildren and 8 great-grandchildren.

This entry was posted in Obits. Bookmark the permalink.

6 Responses to Mickey Thompson – In Memoriam