Some memories stay with you forever. Some fade away, half forgotten, until something pokes them with a stick to waken them. Like a dormant hornet’s nest. Ready to start buzzing and attacking your brain. Insisting on getting you to revive them and getting to the front part of your brain waiting for release. This one not only has the buzzing, but it is accompanied by the blaring of calliope music.

When I was about 8 or 9, my uncle took over the management of the penny arcade in an amusement park. What a treat to hop on the bus and ride the Merry Go Round housed in the building.Yeah, you could do that all those years ago. The horses went up and down as they went round and round. All brightly multi-colored. You could almost imagine you were riding along with Roy Rogers or Hopalong Cassidy. Chasing the bad guys and shooting your 200 round six shooter. Along the way, you could lean over and try to grab the brass ring for a free ride. What a rush !!

Fast forward about 5 years. I got my very first job working in the arcade. I had to make change, tend various games of skill and award prizes. To get from one station to another, I had to learn how to hop on and off the spinning Merry Go Round. Fortunately, I was an indestructible teenager, and the concept of falling off never occurred to me. If it had, I would have been toast. Also, no more imaginary cowboys riding along with me. I was 13 and an adult, for crying out loud. 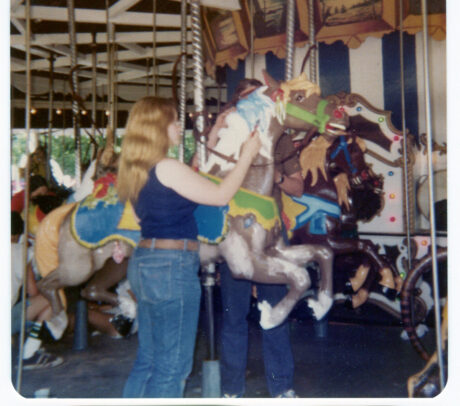 Now we go to 1977. My teenage daughter was one of forty kids chosen to repaint the carousel horses at another amusement park. Above you can see a picture of the young artist at work. Below is a picture of the intarsia piece she made for a book she will soon have published. If you aren’t familiar with intarsia, boggle it.

It is really a beautiful art form. 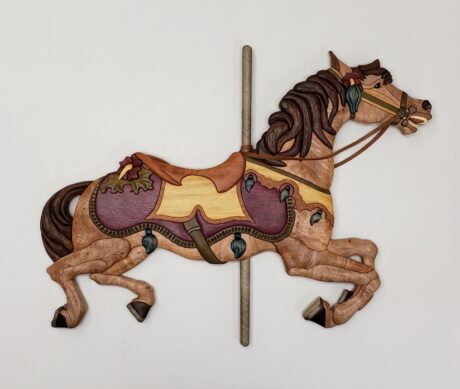 If I sound like a proud father, damn right I am.

Seeing the carousel horse and talking about it, kicked the hornet’s nest and stirred up all those decades old memories. They have been banging around in my head screaming for days. Now I can share them with you.

It seems like life, from the first carousel to now, consists of many tiny arcs that make a circle. Each tiny arc is something you did right or something you did wrong. An intarsia of pieces of who and what you are now. Pieces of time. Pieces of you. Cut and sanded and mounted for all to see.

The carousel entered my life many years ago. Became important again a few years later, and is reappearing at this late stage of my life. The Merry Go Round goes nowhere, but it’s circle encompasses all. So, that almost closes the circle after seventy plus years. What goes around, comes around. That’s what they say,right?

Maybe, just maybe, through a fault in the stars, a glitch in the matrix, a forgiving universe the lapses of we imperfect beings are not punished. Second or third chances are granted. You end up getting far better than you deserve. If that’s the case, say thanks, and ride that painted pony, let the spinning wheel fly.

Life is full of mysteries. So keep reaching for the brass ring. Keep reaching. You never know.

This entry was posted in Creative Work, General Interest and tagged Fred Prout. Bookmark the permalink.

5 Responses to What Goes Around