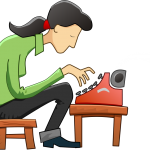 from the desk of Helaine Hepworth

Timber Valley is a safe, secure, comfortable place for seniors, especially for single women, but sometimes it is just not quite enough and we get overwhelmed with life’s little problems. I am proposing one more committee, to be called Husbands At Large or just “HAL”. The committee would be run much like a library. Wives would fill out 3×5 cards with their husband’s name, talents, skills, and faults. A librarian will take the cards and maintain the files.

All single women will be issued a library card giving them the right to check out a HAL for 5,10,15 or 30 minutes. But the rules must be followed:

Disregarding these rules may lead to HAL being expelled from the program and the lady will have to surrender her card. 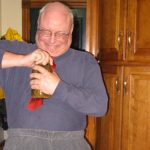 An example of a 5 minute job might be a pickle jar. Every time I try to open a pickle jar I risk spraining my wrist. But a HAL would easily give it a twist and I would hear the satisfying pop of the lid. HAL would go home with 50 cents, enough to dry a load of clothes.

I saw a spider on the ceiling of my bedroom. No way could I sleep in that room until the ugly creature left. If I had been able to check the card file for a hunter, it would have only taken 10 minutes and he would have gone home with enough money for a Saturday morning donut and I wouldn’t have had to sleep on the couch.

Here is a fifteen minute job every single lady would appreciate. Imagine you have just trudged your way through a bunch of grocery stores and arrive home with a car full of bags. How nice would it be if HAL met you with a glass of water, tells you to relax, as he unloads the car. HAL even puts the cold stuff in the fridge. A quick $1.50 for him. Enough to wash a load of clothes.

The thirty minute check out I would use a lot. I would go to the card file and look for a special HAL. There would be at least one card that says “My husband is totally useless. All he does is drink beer and watch TV.” He will be perfect. I will put him on the couch with a beer in one hand and a remote in the other. For thirty minutes I will be able to rant, rave, and yell about the state of my life, the government, global warming and where has common sense and respect gone. HAL of course, will nod his head in affirmation, saying “Yes Dear”

(The use of the word “Dear” is optional and in no way indicates affection between the parties). In thirty minutes I will have solved the world’s problems and HAL goes home with enough money to take his lady to lunch at Costco.

Oh, it has been fun thinking of the possibilities. It would be nice, but I know this proposal would never get past our predominantly male, board of directors.

But Ladies, election time is near, what if we had a predominately female board. Oh… the things we could accomplish. Ladies, think about running for the board.

This entry was posted in Featured, Humor. Bookmark the permalink.