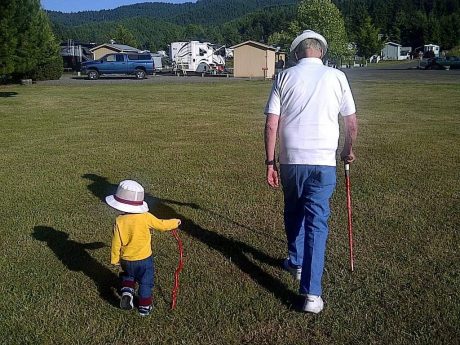 Aaron and great-grandpa Frank with their walking sticks.

Frank Johnson passed away the morning of Saturday, June 22, at Mercy hospital in Roseburg after taking a fall the previous Saturday.

He and his wife, Cathey, are long-time active leaseholders in Timber Valley, having gotten their lot in 1992. Frank (with Cathey’s assistance) is the “Johnny Appleseed” of Timber Valley, having planted 27 trees in just one year, as well as many others for the beautification of our park.  He has also volunteered on various projects throughout the park.

One of his hobbies was making walking sticks of varied materials, and always with a special flair. There are several being used by appreciative walkers in Timber Valley. Without a doubt, the most special one was a tiny one made of curly willow for his first great grandson, Aaron, when he was only 3 years old. That’s the two of them in the picture above, strolling across our golf course.

Frank was a man of many abilities and interests. After serving his country in the Navy during the Korean conflict, he worked as a policeman, for the Sheriff’s Department, and as a State Trooper in Alaska, where he also owned and operated a commercial fishing boat.

Cathey and Frank celebrated their 65th wedding anniversary on March 30 of this year.

At his request, there will be no services.

This entry was posted in Featured, General Interest, Members, Obits. Bookmark the permalink.