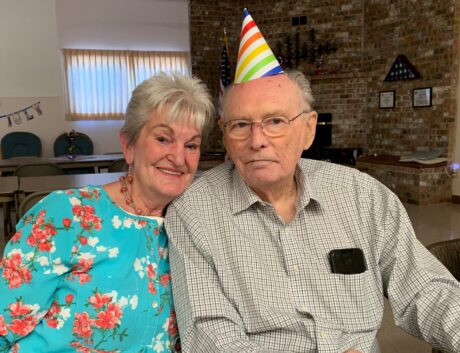 Framed by the green trees of Timber Valley SKP Park, the red, white and blue flag flies at half-mast. Dipped in honor of Layton Fletcher who passed away August 29, 2021. Layton and his wife Veanna have lived in Timber Valley since 2007.
Layton was born June 27, 1938 in Sidney, Iowa, then moved to Oregon when he was two years old. He graduated from the University of Oregon with a business degree. His first marriage lasted 35 years and then he married Veanna, June 20, 1996. Veanna has many happy memories of their wonderful 25 years together. Layton taught 5th and 6th grades in Springfield, OR. He took each student home to dinner to get better acquainted with them. He delighted in taking his granddaughter to school where she set on his lap and helped him teach. He coached girls and boys basketball and football and he refereed basketball.
Layton and Veanna lived in Portland for 3 years and then in 1999 they began traveling full-time in the US and in New Zealand and Australia. After about the first year of traveling they became involved with Habitat For Humanity. Asked how many builds they did, Veanna replies, “We didn’t count; it was our ministry.” She does admit that at first they did a build every month and the traveling proved to be too much so they then volunteered every other month. They worked and traveled with Habitat for 6 years.
They signed up for Timber Valley and it took them 6 years and 3 months to get into the park. While living in Timber Valley, Layton volunteered as a driver with Dial-a-Ride. He was known for picking up one of the blind riders and touring her around Sutherlin. He described happenings and new buildings and she loved these outings with him. He also was on several park committees, among them, Landscape, Budget and Grievance.
Layton was a “true Oregonian”; his back yard sports a big yellow O. And during the push to change the state’s boundaries he said, “I would not want to be part of Idaho!”
His family recalls him as being “quiet and humble but he lived his values.” Veanna’s brother Jim says “I’m glad I met him. I’m a better man for it.” His granddaughter recalls Layton’s favorite saying as being, “You can’t change the wind but you can adjust your sails.”
Layton struggled with kidney dialysis for six month prior to his passing. He was fully vaccinated for Covid 19 and often said he could not understand why people refused to be vaccinated. His kidney and other serious conditions allowed Covid to overwhelm his weakened immune system and he was in the 1% of vaccinated who contract Covid 19.
Layton is survived by his daughter Mona Coursey Cook of Millersburg, OR. and two granddaughters. Chandra Sarkez of Salem, Oregon was able to be with her grandfather when he passed. A second granddaughter, Elizabeth Fletcher lives in Tasmania, Australia. His wife, Veanna will continue to live in Timber Valley Park. No memorial services are planned.

This entry was posted in Announcements, General Interest, Members, Obits. Bookmark the permalink.