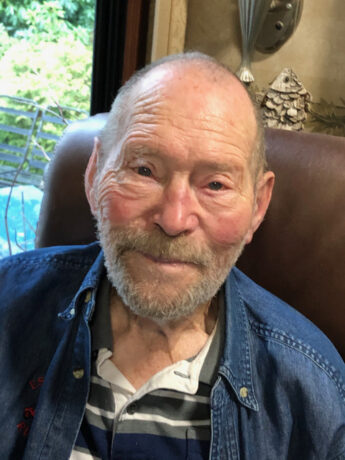 “He will be missed”. Jerdis Ray Larson will be missed not only by family but by his many friends in Timber Valley R.V.  Park.  Jerdis and Joan moved into Timber Valley in 1991 after retiring and beginning to travel full-time in 1986.  Jerdis and Joan were married 64 years; he was a Navy veteran. Jerdis passed away peacefully from a heart condition on April 7, 2021 at 88 years of age.

Jerdis, Joan and their three daughters, Kay, Donna and Jennifer, lived in Santa Cruz, CA and often spent the summers in a cabin in the wilderness area of Idaho. Jerdis was a carpenter and taught his daughters to do home repairs and build many things. His daughter Donna said, “You didn’t know how valuable Dad’s advice was until you couldn’t get it.”  Kay, who came from North Carolina to see her father and be with her mother, quietly said, “We’ll miss him.”

Jerdis was known in Timber Valley for the beautiful wooden hand-crafted Pegs and Jokers sets that he made.  He was an avid game player and never missed a bingo night where he helped Joan do the calling and frequently won. As Joan said, “He partnered with me.” Most of us knew him as a quiet, gentlemanly, friendly man.

Jerdis was preceded in death by his daughter, Jennifer Martin, and is survived by daughters, Kay Smith and Donna Larson, by 6 grandchildren and 9 great-grandchildren. Joan will continue to live in Timber Valley where she has many friends and will frequently visit family.

This entry was posted in General Interest, Members, Obits. Bookmark the permalink.

11 Responses to IN MEMORIAM, JERDIS LARSON