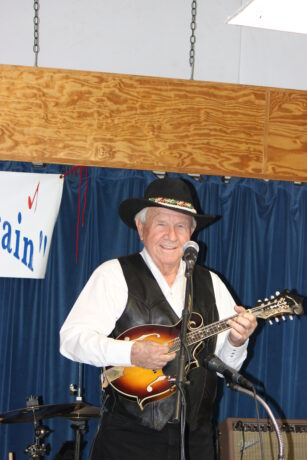 March 1, 2020, the day one life ended and another went into a tailspin of grief. Sometimes it seems like yesterday and others a long time ago. The mind fluctuates in its ability to cope. Looking back.

I had known who Ed was for several years. I had been to see the Traveler’s perform and bought a couple of DVD’s. I had even taken pictures of him and a number of musicians to make a photo album for a handicapped girl who wasn’t coming back to Quartzsite. The photos were of her favorites. It wasn’t until September of 2014 that I talked to him. After a music Jam, he came to me and offered to help me with my budding music. I pretty much blew him off because I knew he had a reputation of being a “womanizer”. Finally in January I agreed to let him help me. He invited me over to help me with my guitar. He was complaining about my strumming. Finally in exasperation, he said “let me show you”. He came behind me and told me to play the chords and he would strum. When he put his arm around me I forgot everything I was doing. I was twitterpated. Stunned, I asked Harlan what happened. He laughed and told me I forgot to play. Ed loved for me to tell this story of how we met. From then on we were a couple – complete. We made our commitment to each other and started on a beautiful life together.

Although we only had 5 years we crammed a lot into it. We were never apart in that time. He completely accepted me and my Asperger quirks because he had a grandson and a great-grandson with Aspergers (high functioning autism). He was living a life of not caring after losing his wife to cancer years before. I had spent a lifetime looking for him but it was worth the wait.

I became the Cookie Lady for his band The Traveler’s and supported him while continuing my own music. Ed had Arterial Heart Disease, was Diabetic and suffered from Neuropathy. I had a lot to learn but gradually his health improved. We traveled, played music lived and loved and were grateful for every day we were blessed with. People who did not know us thought we had been married 30 or 40 years. Sometimes things just work.
So now it is a year later and I still struggle to find who I am without him. He’s still is a part of me. I play our music and have started writing again. Life goes on.