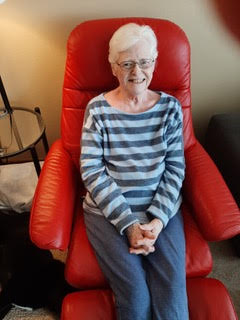 Courageous, caring, loving: Rita Prout was all of these and more. Though legally blind she completed a music degree and taught music. She co-directed a Community Theater. In Timber Valley she served on many committees, including Welcome Committee and the Library Committee. Commendable for a sighted people but requiring a high degree of courage and confidence for a sight- impaired person. Many did not realize she was blind, because she was so active and competent.

Rita was born in England and came to the United States as a ten year old. Her delightful English accent colored her speech many years later. She and Fred met when they co-directed at the Community Theater. They soon found out they had many things in common. They lived in Connecticut and Florida for a time and when they retired they bought a motor home and the road became their home; they visited 46 states after 1999.

Fred recalls when they Rv’d no traveler was ever alone for the Holidays. Rita would invite them in and Fred says “You were suddenly with us.” They stopped at Timber Valley for a week the first time and then increased their stays until they moved into Timber Valley permanently.

Rita’s eyesight was “way beyond the chart”, Fred says but she was finally fitted with glasses that improved her vision somewhat. Her genetic disorder predisposed her to cancer and she began chemotherapy treatments last January. The first treatments were horrible but with adjusted dosages she was able to tolerate them for a time. The Tuesday before she died Fred and Rita decided that she would terminate the treatments. They found that her doctor had reached the same conclusion. The doctor said she would be “uncomfortable” for 3-4 months and then feel good for several weeks.

His predictions did not come true. Rita died within one week on Tuesday, May 19th. Surviving are her husband, Fred, living at Linus Oaks in Roseburg and two daughters, Pamela in Connecticut and Robin in North Carolina.

Her many friends will miss the lady with the big smile, the beautiful white hair and the generous heart. We hope that her family will find consolation in their many happy memories of her.

This entry was posted in Featured, Members, Obits. Bookmark the permalink.

7 Responses to In Memorium, Rita Prout