A little more than 17 years ago, David and Beverly met at a West Coast Swing dance lesson in Brentwood, Calif.

“We were both single, the same age, and at about the same expertise levels,” recalled David. “After a few weeks, we decided we needed to practice between lessons in order to improve.”

One thing led to another and fast forward five years, they married in 2007. Beverly continued as a “top notch” legal secretary for a law firm in Los Angeles County. David worked as a purchasing agent for McDonnell Douglas in Long Beach.

Born in Hawaii, Beverly identified herself as half-Chinese, half-Portuguese. Her two sons, from a previous marriage, still live in Hawaii. 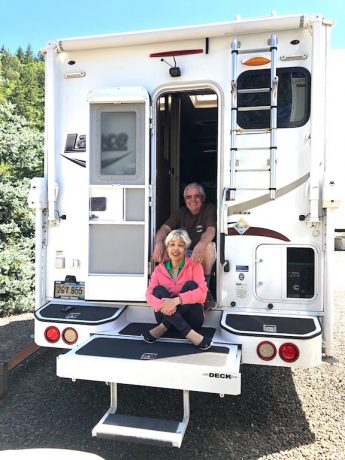 The Van Westens both retired at age 62 and became extended time RVers, exploring America about 10 months each year.

“We never had any particular destination in mind,” said David. “Every place we went we would stay for a couple of weeks, sometimes a month. We were never in a hurry.  We wanted to sample the neighborhood.” Along the way they became members of the Escapees.

Once they sold their house in 2013 they went fulltime. “We kept returning to the Pacific Northwest,” said David.

In 2014 they placed their names on the Timber Valley Active Wait List and about 3 1/2 years later became members.

Beverly loved taking short trips in their Lance camper and Silverado dually truck. “It has all the bells and whistles,” she said recently.  “It’s really cushy camping.”

Among other interest in the park, when possible, Beverly helped “pick up stix” with the landscaping crew.

There will be a Memorial in September. Details to follow. No flowers please. Make donations to the local cancer group.

Julianne G. Crane writes about RV and camping lifestyles, people and destinations for online sites including RVWheelLife.com and RVTravel.com
View all posts by Julianne G Crane →
This entry was posted in General Interest, Members, News, Obits. Bookmark the permalink.