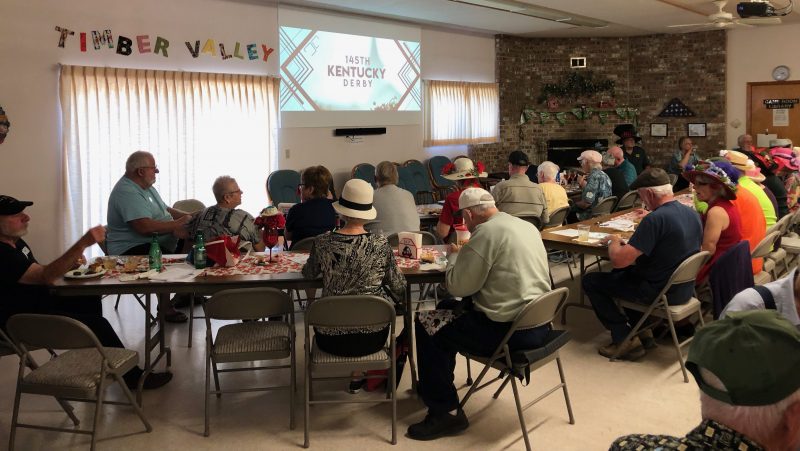 At last count, more than 60 Timber Valley members and guests stopped by for the 145th Kentucky Derby Party on Saturday, May 4, 2019.

Before the main racing event, people wagered on their favorite horses at the betting table (center) and munched on crackers and donated Rose City Pepperheads ‘Farm to Jar Pepper Jelly.’ Next came the ‘Taste of Kentucky’ ham, turkey and roast beef sandwiches, Kentucky Derby Pie, and bourbon balls prepared by Terry Hilty (#71). 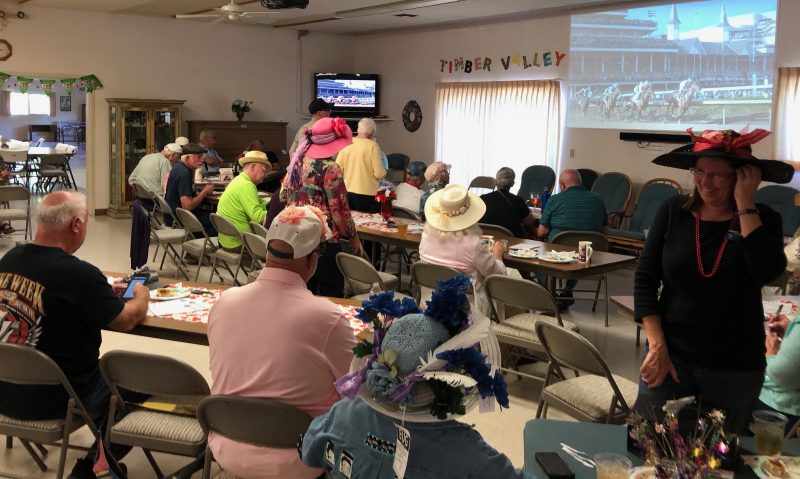 All the Kentucky Derby events and final Running for the Roses were projected onto the Clubhouse Big Screen. Special thanks to Rob Hendershot (# 82) for setting up the race on the big screen; and to Jim McIntosh, Dennis Hellawell and Thom Hoch for technical assistance. 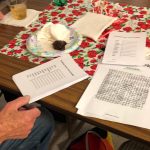 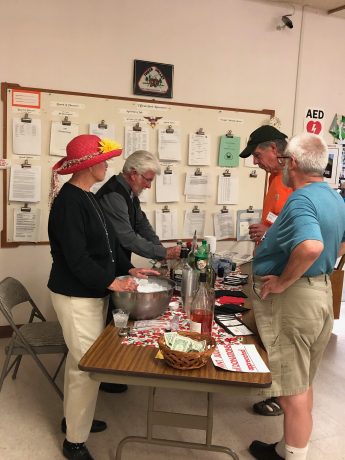 When not noshing, mingling or drinking Mint Juleps, Derby goers tested themselves by working on several word and trivia games. 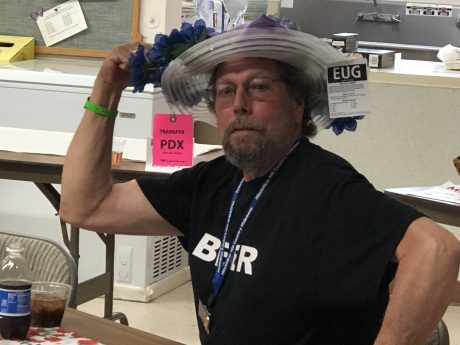 MC Fred Prout (#44),  kept events entertaining and moving. He also whip up the crowd to raise  $132 for the Sutherlin Food Bank from the auction of Derby Hats. An addition, $9 from betting winnings were also donated, for a total of $141 going to the help our local community fight hunger. 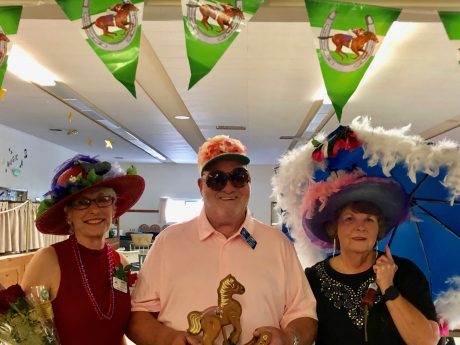 For the third year, the event was organized by Linda Zink and David Arndorfer (# 16), assisted by Julianne Crane and Jimmy Smith (#197) and Terry and Mike Hilty (#71).  Other volunteers that made the success happen include Connie Lankford (#121), Jackie Deal (#109) and Patt Anderson (153) registration; Marti Cady (172), Susie and Jack Varner (# 105) at the betting table; bartenders Patty and Dal Healey (#117) and Chuck Williams in the kitchen. Derby hat judges included Micky Thompson (#9); new member Mike Resnick (#53); and Larry Heath (AWL #32).  Lastly, a big thank you to everyone who helped with set-up and clean-up.  Many hands equals fast, fun work.

Julianne G. Crane writes about RV and camping lifestyles, people and destinations for online sites including RVWheelLife.com, MotorMatters.biz, RVTravel.com
View all posts by Julianne G Crane →
This entry was posted in Events, Jacks and Jills, Life at Timber Valley and tagged Jacks and Jills. Bookmark the permalink.