Those were the very different reactions I heard the Monday my cocker spaniel went to the vet soon after I settled at Timber Valley. Alarm and commiseration from everyone at the clinic. Befuddlement from dog lovers everywhere else.

Google was in the first camp, full of scary stories. Reputable articles said:

· Its seed is smaller than a sesame seed and doesn’t break down inside the animal’s body. Its tail is barbed, so licking just drives it further in – where it can do real damage and even cause death (though not in humans).

· It can get into the body through not just paws but eyes, nose, ears, mouth – just about any patch of skin (including places you probably wouldn’t look).

· The plants are all over the West and spreading. The seed hardens in dry weather, making it a risk from May to December.

Who knew? Certainly not me – but here’s what this calamity looked like as I learned: Annie started carrying her hind leg for no apparent reason. She had been licking her paws, and that soon became a full-time obsession. Three days later, a round welt on top of one paw developed. By the time we settled in to wait at the clinic, another sprung up. Then a third between the waiting and exam rooms.

Annie’s immune system had tried to evict the foreign matter by floating them in those sores. That apparently never works, except to produce alarmingly bloody pawprints that motivated us to get to the vet ASAP.

The vet prescribed antibiotics, a cone, and some time. A week later, after these bloody, blister-like sores repeatedly broke and then puffed back up, we were back. While a painkiller and light sedative made Annie’s mind wander pleasantly, the vet cut into her sores to find two small seeds, one in each sore. The third sore, lower on her foot? One of those seeds apparently punctured my dog there and already traveled farther into her!

It could have been worse: the vet had removed a foxtail from a cat’s eye the same day. Other pets’ owners report never seeing the culprit at all. The good news is these demon seeds penetrate quickly – but not instantly. To beat them, the advice is:

· Check your pet’s feet (especially) every night, including between the toes, and other tender areas (ahem). Comb through long hair extra carefully.

· Pull out any “awn,” as these are called, with your fingers or tweezers if they come out easily. Go to the vet right away if those areas are inflamed. Don’t dig for them or break them – the whole seed must come out.

· Watch for other symptoms, like your pet’s shaking its head or sneezing excessively. As always, lethargy and loss of appetite could mean trouble.

The better plan is to avoid foxtails. Consider a summer cut to make it harder for the seed to grab hold – and easier for you to find. Steer clear of tall grasses and weeds. Dogs look overjoyed bounding through fields – but you all pay the price if foxtails are lurking. 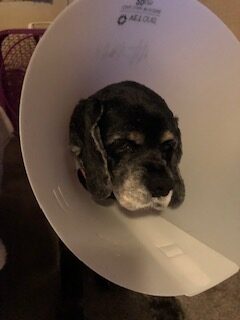 If Annie didn’t get her foxtails diving into a rough patch at the edge of Timber Valley, they probably came from racing her sister up a path at the Cooper Creek Reservoir a few days before she started limping. I still haven’t seen this sort of plant – unless I’ve seen it a thousand times: its seed head looks like wheat, or most any grassy weed. The vet knows it too well though and saw some at the Sutherlin dog park.

Annie is on the mend and – now that we know – we’re with the Foxtails!!! crowd. You probably should be too?

With many thanks to Dr. Samantha Boyajian, DVM and the team at Bailey Veterinary Clinic in Roseburg.

This entry was posted in General Interest. Bookmark the permalink.