THE MISADVENTURES OF L’iL TOOT

L’il Toot is a Classic Bell Boy boat.  Ed found her in a field with a gaping hole in her side.  After approaching the farmer he bought her and hauled her home where he lovingly restored her. Ed loved that boat like a daughter. I first met her in Chimicum Washington in the SKP Park.  We took her on several cruises around the area.  Once Ed got his lot here in Timber Valley we brought her down here and so the misadventures began. 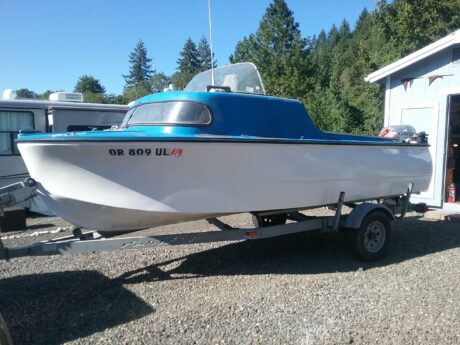 In 2017 we stripped all the wood down including the steering.  We restained the wood and put on seven new coats of varnish.  We then put everything back together.  On a nice sunny day we took her to Florence and launched her at the city dock.  As soon as we cleared the dock the pin fell out and the wheel came loose.  No steering!  Lucky for us another man saw us and towed us back to the dock.  Ed borrowed some tools and put things back together again.  We then took a ride but I’ll admit to being a little nervous something else would fall off.

In 2018 we repainted the whole boat inside and out – well I painted and Ed supervised.  I had painted the entire inside without getting a drop on me.  As I was finishing up I leaned over to touchup a spot and tipped the blue paint into the floor.  Toot now had grey decking with a blue splotch in it.  Oops!  Ed never failed to tease me about it.  I then painted the outside without mishap.

That year we took Toot to the Chapter 9 Crab Rally again in Florence.  We got up early with the other boats and launched at the city dock.  The other boats took off.  When we shifted into drive Toot coughed and died.  We could idle along and were fine but try for speed and we were dead in the water.  We (meaning me) baited and put out the traps and after a bit we had our first catch.  Now I must say at this point that Ed had 12 stints in his heart and any exertion would cause chest pain so I did all the heavy stuff.  By now one of the other boats came back to see where we were.  We told them our problem.  It was decided we would take all the crab back to the cleaning station and clean them while everyone else kept crabbing.  Afterwards we loaded up and took the crab to the ladies in camp.  After making some phone calls, we were able to get Toot into a shop for repairs.  By then crabbing was over.

In 2019 we agreed to take Toot along with a couple of other Chapter 9 boats to Cooper to take people for rides.  We got there, launched and took a spin to be sure everything was OK.  Nope, we started to sink.  We limped back to the launch without totally sinking and pulled the boat out only to find out Ed had forgot to put the plugs in.  They were back home in Timber Valley on the workbench!

Plugs in, we were ready for the Crab Rally.  Toot was running good and we had her and the pickup camper in the yard getting ready.  Ed’s heart was working better.  He was busy checking batteries, etc and climbing in and out of the boat.  Ouch!  He threw his back out.  The doctor didn’t want him bouncing in a boat for at least two weeks.  No Crab Rally for us!

Now you might think Ed was totally incompetent but he had spent many years on boats. He had lived on a 40 footer with only a few mishaps over many years.  We had taken the grands crabbing in Winchester without mishap.  Blake went on his first crabbing trip with Ed and did all the heavy work while I stayed back and played with the new great grandson.  Ed had a vast knowledge of boats and had a Captain’s License.  I will say that Ed had the ability to laugh at himself and take the good natured ribbing in stride.  He would laugh and tell stories on himself of his misadventures.  He loved L’il Toot and I think she tolerated our misadventures – even the blue paint on her deck.

8 Responses to THE MISADVENTURES OF L’iL TOOT