Heroes come in all sizes and forms. Sometimes it’s the result of the act, rather than the act itself, that is heroic.
The “hero” of this story is a moron. A mouth breathing, knuckle dragging, Neanderthal, tobacco chewing, drooling moron.
How, you ask, can he be the hero?
Read on.
Rita and I spent a lot of time in Lake Havasu City, Arizona. We joined a membership park, volunteered, and became part of a community of wonderful people.
We had recently lost our fourteen year old best friend, Gunnar, and were looking to become adopted. See, we believed that the process of acquiring a pet was simple. Put yourselves in a situation where you can be seen by various prospects. When the right one sees you, you all know it. Three wonderful dogs in forty years.
It works.
In addition to all the fun things we did in the park, I started walking five to six miles a day to lose weight.
One day, I was walking through a local neighborhood, and said moron was standing outside his house with his Shepherd dog. Without a leash. I guess the dog felt I was a threat walking on the opposite side of the street, so he ran over and bit me.
I chased the dog, moron stands there smoking. NOT A WORD. Just smoking and staring. Now, I am not a violent person. But, sometimes, you have to hold back. I did.
I became concerned about whether this cretin would have bothered to get his dog shots. Rabies etc. So I call the police and they referred me to animal control. All in front of the moron, who still hasn’t said a word. Sorry, would have been nice.
Shortly after I returned to the park, the animal control officer came to take my statement and let us know the dog had current shots, so no problem there. She also issued a citation to the moron.
Wonderful. 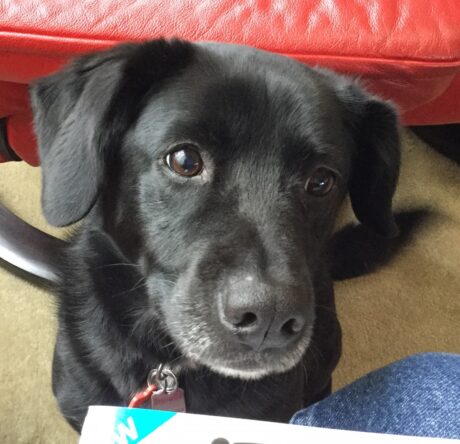 We mentioned to the officer that we were looking to be adopted. She happened to be in charge of the shelter just north of town and we were welcome to visit… Visit we did.
It was a nasty, smelly place, but they did the best they could. At the end of the tour, Rita and a little black lab mix did an eye meld, and Kelly came into our lives.
Kelly is a runner and may have gotten lost chasing a squirrel or a rabbit. She wasn’t perfect, so her previous people may not have looked for her too hard. Their loss.
Kelly just celebrated her thirteenth birthday, and she has some age related issues. Most days she is fine. Some not. She needs a little more attention now, but it’s worth it to see the rotary tail wag and attract perfect strangers into her web of friends.
So here’s the deal. Every day we have a choice. We can concentrate on the dog bite, or the many years of happiness because of it. Just as a bug in Rita’s eye was a life changing event, encountering this moron gave us the opportunity to get a very special little girl. All of our lives got better because of it. Much better.
—
Fred

8 Responses to A Moron Hero???