DEER ME !! Suzie Rupert to the rescue ! 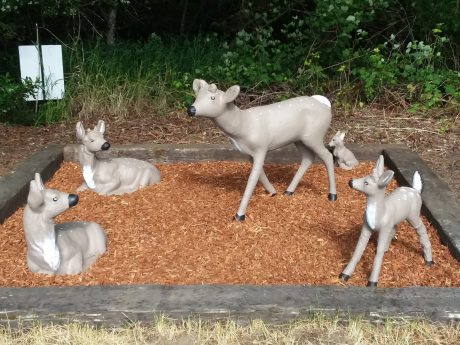 The condition of the cement deer family in Snoopy’s Meadow had fallen (two of them had actually fallen over) into a severe state. Over the years they faded, cracked and parts broke off. In addition they were partially obscured by surrounding blackberry and weed overgrowth. It took major reconstructive and cosmetic surgery repair to help them. The fawn had literally lost it’s leg and required building a prosthesis. The brushy overgrowth has been cleared back, cracks filled, missing parts including the leg, rebuilt as best as could be. Now coated in fresh paint they await your return visits to Snoopy’s Meadow. Thank you Suzie Rupert for seeing something that needed attention and independently stepping forward to take on the task.

This entry was posted in General Interest, Members, News. Bookmark the permalink.

15 Responses to DEER ME !! Suzie Rupert to the rescue !