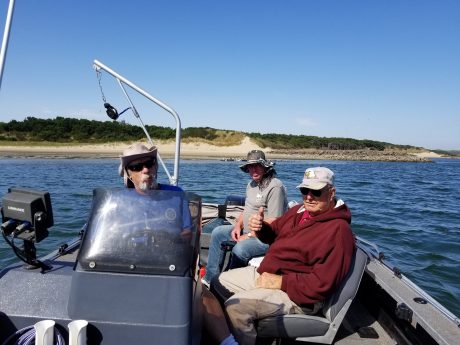 Chapter Nine’s Crab Rally (officially known as the Coast Rally) was a whopping success for us crab eaters, probably not so much for the approximately 100 crabs that gave their lives for us. Boats were provided by Jerry Christensen and George Boykin; each boat carried a crew of four that varied somewhat daily. Thanks to all of them! We ate: crab and more crab and Mexican and Chinese food and pulled pork sandwiches and breakfasts and more food. Do we ever do anything that doesn’t include eating?
We also traveled to see the magnificent Heceta Head Lighthouse Keeper’s house. (The lighthouse itself was undergoing repairs and off limits.) Some of us went to the casino, some explored up and down the coast. The camaraderie was unmatched. Fun and games in the evenings. Good friends and gossip.
Several of us over-nighted in motels and enjoyed the fun. At the business meeting new officers for Chapter Nine were elected. Betty Bush will be President, Rick DeYoung Vice president, Terry Hilty, Assistant Vice-President. Jackie Deal, Secretary for summer, Larry Heath, Secretary for winter, and Ed Spearse, Treasurer.
Rallies give folks who can’t or don’t travel anymore a chance to get out of their daily life (dare I say rut?). After four days of self-indulgence, coming home was almost culture shock. No more peeks at the ocean no more hilarious goofing-off. Back into the old routine but with a sense of renewal and re-invigoration.
Chapter Nine publishes a monthly newsletter, “Trailer Tracks”, and hosts a breakfast the second Wednesday of each month. Frequent (monthly) day trips help satisfy that yearning for traveling. If you haven’t joined in the fun; please do, you’re most welcome.

Check the Photos section of the Web Page for more photos of 2019 Chap 9 Crab Rally.

This entry was posted in Chap9, Events, General Interest and tagged Chapter 9. Bookmark the permalink.