Communication within Timber Valley during Emergencies

Marc and Emergency Preparedness Co-Chair Julianne Crane conducted that meeting. Marc stressed the need for residents to be as self-sufficient as possible. Julianne presented examples of readily available communication devices, such as color-coded window cards to indicate a resident’s status. Those residents present also offered many valuable suggestions. 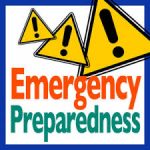 The residents present adopted by consensus a proposal that eleven emergency communication teams be formed (one for the neighbors on each street in the Park), with volunteer captains and co-captains, who will be responsible for disseminating information to residents of those streets. They are to confirm contact information about each neighbor and it will also be their responsibility to know which lots are occupied, or not, during the next emergency.

Nine residents volunteered at that meeting to be team captains and several others volunteered as co-captains. Two captains (plus co-captains) are still needed, for the “Creekside Team” (Lots 1-19 & 206) and for the “Upper Hilltop Team” (Lots 88-114). Please contact Rick De Young (phone 541-315-2830) if you are willing to be a captain of one of these teams..

It was also agreed that the emergency communications group (subcommittee members and team captains and co-captains) will meet weekly, on Saturdays at 10 a.m., to hear and implement more ideas and plans for communicating in the next emergency.

Many residents present at the March 9 meeting recognize that, while it is tempting to believe our February 2019 “Snowmegeddon” is not likely to happen again, we could face some other emergency situation as early as tonight! So, we agreed, now is the time to decide and implement steps to improve our communications to better deal with the next emergency. 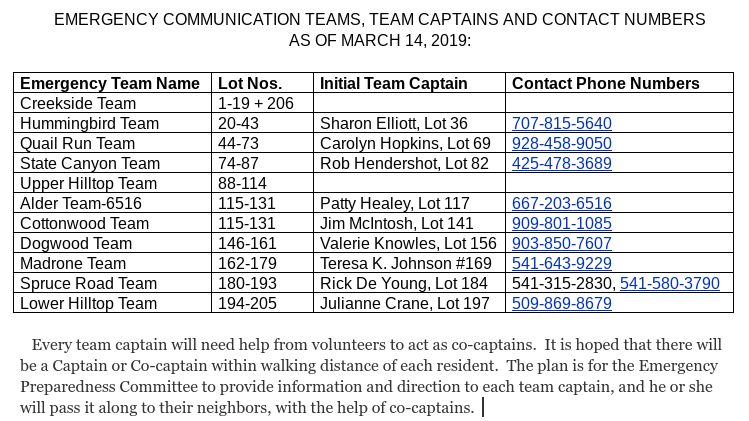